It is with great sadness we hear of the passing on Thursday, 12 August of 99-year-old World War II Lancaster Bomber Pilot John Arthur Richards.

Arthur (as he prefers to be known), recited the Ode during the special ANZAC Reflection Service at Central Park in Joondalup, held in May this year following the cancellation of the ANZAC Day commemorative services in April due to a COVID-19 lockdown.

Arthur was on his 13th mission over Germany when his plane was shot down over Germany and he was captured and spent the remainder of the war as a POW until he was freed by the Russians in 1945.

Shot by an upward-firing canon and unable to put the fire out, Arthur told the crew to jump. While five got out, it was never known what happened to the other two.

Arthur and the plane’s navigator then spent three days and nights trying to get to the Baltic Sea to steal a boat and get to neutral Sweden, but on the fourth night, they were found and captured by a German squad.

Arthur told ABC Radio last year he wasn’t frightened about flying over Germany because he was 22 years old and thought he was bulletproof.

“But that night, when they said halt and I heard the bullet chambers, I knew I had to be careful,” he said.

He said while it would have been easy for the squad to shoot them and throw them in a ditch, “they did the right thing and took us to a prison” where they met up with the other three survivors from the plane.

Arthur was never able to find out what happened to the other two crew members.

On his return to Western Australia, he married Gertrude Carrie, who died suddenly in 1985.

Born on 26 June 1922 in Subiaco, Arthur grew up in Arthur River and attended Bunbury High School as a boarding student after being awarded a scholarship.

He attended Teachers Training College in Perth in 1941 and his first appointment was to a one-teacher school in Hyden Rock.

Arthur was a long-term member of the Joondalup RSL Sub-Branch and is survived by his second wife Suan and children from his first marriage Jim Richards, Bill Richards and Beverly Hardcastle from WA and Ann Hornibrook in Qld.

Photo Caption: 99-year-old Arthur reciting the Ode at the ANZAC Reflection Service in Joondalup last May.

To read more about Arthur, go to page 28 of the RSLWA’s The Listening Post, July 2021 edition.

For the full ABC interview with Arthur Richards recorded ahead of ANZAC Day 2020 click here. 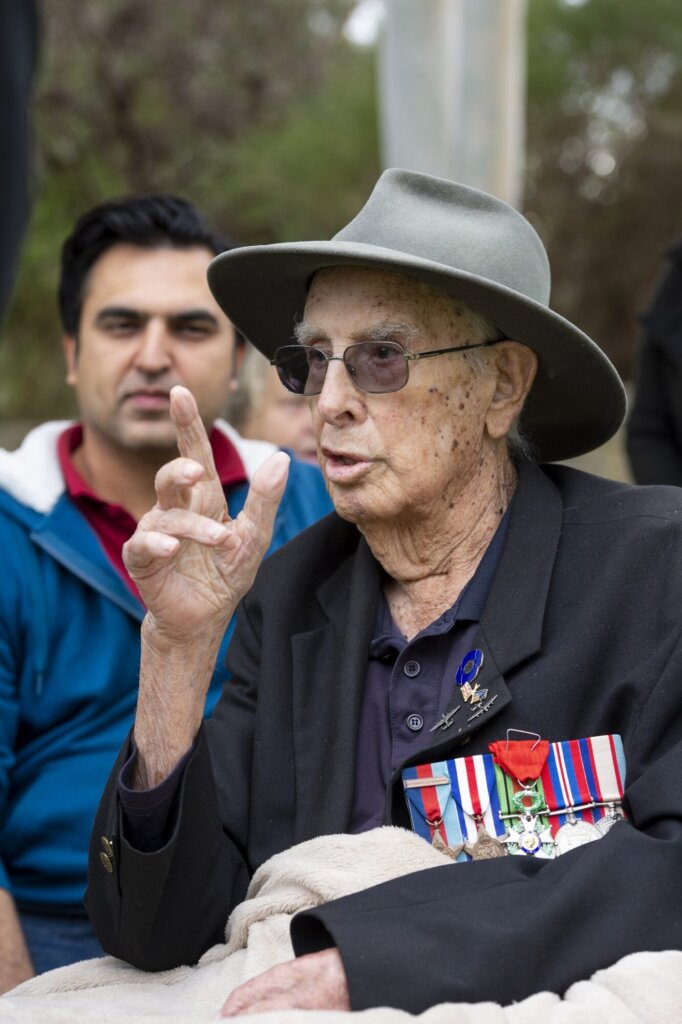