Royce spent a total of 28 years in the RAN, joining as a Reserve Officer in 1985 and serving a total 16 years full-time service and 12 years as a Reserve Officer. He is also a very experienced senior manager in the civil world, having managed a number of National and International companies as State Manager in Western Australia prior to joining the RAN.

In the Navy he qualified as a Maritime Warfare Officer (Navigation) with a sub-specialisation as a Maritime Trade Organisation Officer, completing numerous professional and personal development courses, including the RAN Staff College in 1994.

Selected for command training, he passed the RAN Prospective CO/XO Course and served as Executive Officer of HMAS Ships ADROIT, GERALDTON and BUNBURY and as the Executive Officer of the Darwin Naval Base, HMAS Coonawarra. He also served as a Director of the  Australian Naval Cadets for two and a half years in Canberra.

Ashore, he qualified as a Naval Marine Pilot in 2000 and has piloted many of the major ships and submarines of the RAN. This included two of the world’s largest warships, the nuclear-powered aircraft carriers USS Abraham Lincoln and USS Carl Vinson and Nuclear powered submarines USS Oklahoma City and USS Michigan.

Awarded a Systems Commander Commendation for his work as Executive Officer HMAS Coonawarra in 2005, Royce has also has been awarded the Defence Force Medal and the Defence Long Service Medal with two clasps.

Royce retired as a Commander from the RAN and worked in the North West as a Marine Pilot in Broome and Cape Preston until 2015. He joined the Mt Hawthorn RSL Sub-Branch in 2012 where he has served 2 years as Vice President and 3 years as President.

An active volunteer firefighter of 20+ years and is currently a Senior Fire Fighter at Ledge Point Bush Fire Brigade. He has deployed over the state from Esperance in the South  to Tom Price in the North on many occasions, in  support of local brigades and in response to major fires.

Royce joined the RSL in 2010 whilst still serving in the RAN and became very interested in the role it plays in support of all veterans and their families, particularly the assistance provided to families when the sailors and officers returned from active service.

He lives in Perth, Western Australia, with Margaret, his wife of 49 years. He has two adult children, Francine and Craig and two granddaughters, Madeleine and Poppy. 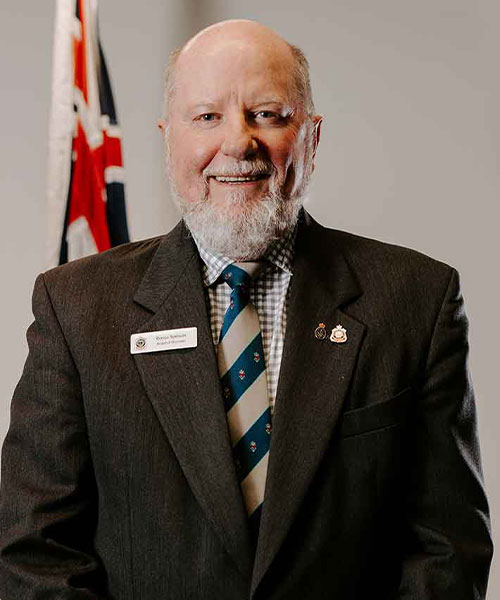